Iwai Blacksmith Company was founded in 1939 in the Echizen Province by a named Genmatsu Iwai. Echizen, known today as the northern portion of Fukui Prefecture, is known throughout Japan as one of Japan’s major knifemaking cities. Before starting the company, Iwai was a blacksmith in Sakai, another legendary Japanese knifemaking city, and trained under Motojiro Yamagata, a local blacksmith. As World War II began to ravage Japan, Genmatsu’s life was turned upside down and he was left with nothing, prompting him to return his hometown of Takefu, now modern day Echizen. It was in Takefu where he would start Iwai Blacksmith Company and lay the foundations of what the company has become today. For over 80 years, Genmatsu worked tirelessly and has since handed his company off to his son, Takayuki Iwai, to continue his legacy.

A talented blacksmith himself, Takayuki received the certification of Traditional Cratsman in cutlery production in 1994. Eventually, Takayuki would hand the reigns of the company off to his son, Takeshi Iwai. Takeshi’s career as a blacksmith started after graduating middle school when he began working for his father. Just like his father, Takeshi was equally, if not more talented than his father, and also earned the Traditional Craftsman certification in 2006, becoming the youngest person to ever do so. Now in his 40s, Takeshi has been working in the knifemaking industry for over 20 years, and is the current owner of the Iwai Blacksmith Company, which he manages with his father. The father and son duo work side-by-side to maintain their companies prestige and to ensure their knives are high-quality.

How to make Takayuki Iwai Knives

Iwai Blacksmith Company’s knives are famously known for being crafted by hand, which is why so many people are drawn to the brand. Every product they produce is worked on for hours, and the company really puts its heart and soul into every aspect of the manufacturing to that every product is unique, special, and crafted with care. Despite modern technology and manufacturing techniques being introduced to make the knife manufacturing process faster and more efficient, Iwai Blacksmith Company believes continuing the company’s tradition of handcrafting all their products was the way forward. It’s thanks to this belief that each knife the company produces is meticulously and expertly crafted to perfection. Each knife is sharp, easy and comfortable to use, and if maintained properly and treated with care, then the knives can last a lifetime. While the company does employ some forms of modern technology to facilitate production, each knife is made by hand. Each knife is unique and customers have a plethora of customization options to fit their individual needs and desires, something which isn’t available to other brands that mass manufacture knives. The Iwai Blacksmith Company also continues to utilize a 700-year-old knifemaking traditional by using a technique called “Echizen Uchi Hamono”.

Iwai Blacksmith Company’s knives are intended for amateur or professional kitchen use. The company produces knives for all your everyday kitchen activities such as cutting vegetables, meat, and fish, and they also produce more specialized knives for hobbies and other uses. A variety of gardening tools such as pruners, wood choppers, and debarkers are also available. If you’re looking for a specific tool, there is a good chance you’ll find it in Iwai Blacksmith’s catalogue.

Some popular Iwai Blacksmith products are:

The Iwai Blacksmith Company currently has one factory which is located in Ikenokamicho, Echizen, Fukui Prefecture. All the company’s knives are manufactured, engraved, polished, and sharpened at this location and then are shipped to be sold to customers. While the company isn’t quite well known internationally as it is in Japan, you can visit their website at www.hocho-knife.com to view their catalogue and to also order a customized knife product. 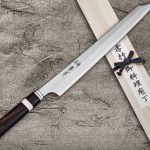 Kitchen Knives : In The Eye Of The Beholder